Colonial Virginia churchyards were not the first choices for burials. The custom was to inter the dead at home. While uncommon today, family (or private) cemeteries were a matter of practicality during the settlement of America. If a municipal or religious cemetery had not been established, settlers would seek out a small plot of land, often in wooded areas bordering their fields, to begin a family plot. Sometimes, several families would arrange to bury their dead together.

In the 18th century, pastors complained about this practice because it meant they had to travel to plantations and farms to conduct funerals. The ideal situation during the Colonial period in English colonies was to bury the dead in churchyards located in close proximity to churches. Churchyard burials remained standard practice into the 20th century for European Americans and other cultures in the Judeo-Christian tradition.

The colonial burial grounds of Virginia were often associated with churches. These graveyards were situated on small plots of land that were located near or around the houses of worship. Graves were parceled out as single plots which often created haphazard rows of gravestones with smaller footstones marking the location of the feet. By the late nineteenth century church grave yards were filling to capacity with a haphazard arrangement of gravestones and footstones. As a result, sweeping burial reforms were necessary as society transitioned to community cemeteries similar to Green Hill in Stephens City. 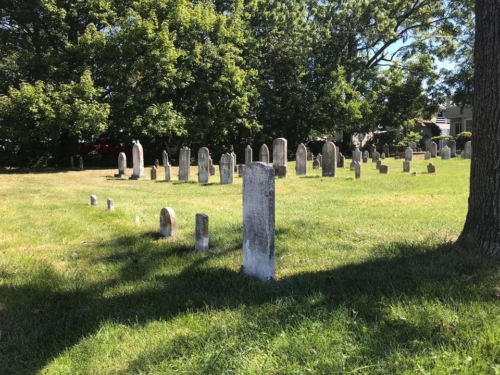 On this site in 1789 a log meeting house was built. A graveyard lay to the back of it which still exists and where some of the town’s early residents were buried. The graveyard can be seen on the north side of our present parking lot and includes the remains of close friends of Bishop Francis Asbury who first preached here in 1783. Friends he noted visiting and working with were local preacher Elisha Phelps and preacher and Revolutionary War Veteran John Bell Tilden. Rev. Elisha Phelps wife Elizabeth was Granddaughter of Jost Hite (early land speculator) and daughter of Colonel John Hite of Revolutionary fame.  Inez Virginia Steele was granddaughter to Thomas Steele, also buried here in 1834. Sons of the American Revolution (SAR) believes Thomas Steele supported the Revolutionary War by taking the Oath of Allegiance and donating provisions. The oldest tombstone dates to 1809 and the newest to 1906.

There are currently 69 recorded burials in the graveyard and only 13 burials in the church cemetery after 1880. The Green Hill Cemetery began operations in 1874 and quickly became the Stephens City municipal burial ground. Most churches began the process of transitioning their burials to Green Hill rather than the church graveyard. In fact, some of the older graves were exhumed and relocated to the new cemetery at Green Hill. The newer cemetery was considered an improvement and family plots were more easily established. The old church cemetery plots were blocked in by the burials of other families around them. In order to have families buried together, family plots were established at Green Hill and family members previously laid to rest in church graveyards were then moved to the new family plot.

Robert VanMeter’s commented in 1938; “The Old Methodist Grave Yard was a burying place for the Methodist people of Stephen City and was established before 1815. It is not used now, but is well fenced and kept in good condition. The markers are in fairly good shape and can easily be read. From the inscriptions we can see that some prominent people of Stephen City are buried there.”

Ray Ewing informed Gunderman that back in the 1940s, the cemetery became filled with Locust trees and the tombstones were overgrown with weeds. Ray’s Grandfather had goats grazing on the cemetery property and Ray would be instructed to bring them buckets of water during the summer months. A simple American wire fence kept the goats contained inside.

Sometime in 1957-58, Rev. Henton stenciled the inscriptions on the tombstones with most likely the assistance of Mildred Lee Grove. Stephens City UMC apparently did not maintain precise records of who and when people were interred here and this effort was an attempt to record the graveyard markers before the inscriptions were lost to time.

Bobby Cook took over the church maintenance in 1986 and provided improved landscaping of the cemetery which was in poor condition. Bobby had all the Locust trees cut down and the stumps removed. Many tombstones had been seriously damaged due to wear and tear or lost through the centuries. In 1992, under the direction of R. K. Shirley, the Church Youth Group cleaned the tombstones and assisted in restoring the graveyard. There was some vandalism in 2010 and an effort was made to cement some tombstones back together. Contractor Scott Haines of Bernard F. Groves Monuments restored 13 headstones. The late Bobby Cook informed Gunderman that at least two wheel barrels of unrepairable tombstone pieces were hauled off. Thomas Emmett’s tombstone (died 1864) was once leaning against a 120 year old Elm tree in the back right hand corner of the cemetery. Also buried underneath the old Elm was Lewis Emmett’s footstone (died 1836). After the Elm was cut down in 2020, both the tombstone and footstone were donated to the Newtown History Center of the Stone House Foundation on September 17, 2020.

Recent investigation discovered the wrought iron cemetery fence was installed after completion of the third church building in 1882.  Sandra Bosley of Preservation Historic Winchester identified our 80 foot wrought iron cemetery fence and gate as a Buckeye Fence, manufactured by Mast, Foos and Company, Springfield, Ohio in 1880. Bosley virtually visited the remnants of the wrought iron fence for some historical investigation.  The eighty feet of fence fortunately retained the gate, which is one of the most likely places to find a manufacturer’s mark or other distinguishing maker characteristics.  This gate was by far the most distinctive Bosley had the pleasure of examining, with an elaborate crest on the top with crossed halberds, heraldic sea snakes, and scroll-like decorative flourishes around the central finial.  Although the label where the maker’s mark should be was long worn away by time, the gate design alone was unique enough that Bosley could say with relative certainty it was a “Buckeye” wrought iron fence from the 1880s. The late historian Mildred Lee Grove’s grandfather, Milton Boyd Steele was a Stephens City resident and a devout Methodist and Sunday School teacher. I am speculating that Mr. Steele, who was in the mercantile trade, had a long-time business relationship with Mast & Foos and recommended that the Methodist church purchase their fence from that company in 1882.

Many grave markers were made of wood and lost to the ages and there very well could be people buried without markers. The Germain Street section of the cemetery would also be the place where poorer immigrants would have been buried. In all likelihood the markers in this part of the graveyard were made of wood and perished over time. As recently as 10 or 15 years ago, there was still a wooden marker at the Old Lutheran Church Cemetery. It was removed by a lawn care service and accidently disposed.

There are depressions at the rear of the cemetery that would indicate deteriorated graves. The Church was used as a hospital during the Civil War. Some of the deceased soldiers were most likely buried here. These soldiers were exhumed and returned to their hometowns or national cemeteries after the war. The Stone House Foundation believes that the interments went all the way back to what is now Germain Street, formally German Street. It is the Stone House Foundation judgement that the Methodist Church cemetery is totally full. The cemetery remains a part of our Methodist heritage.

Note: The houses adjacent to the cemetery are also very old. The Parker-Doggett House at 5283 Main Street was built in the 1880s. The commercial building at 5279 Main Street (first SCUMC property) was built  by Lomax Parker as a grocery store around 1940. The store was bought by C&P Telephone in 1946 which operated a telephone exchange there until the late 1960s.  Edna Grim was the Chief Operator/Manager there until the system switched to dial.  The building was then used again as a grocery store, an antique store and currently All Nation Hobby and Model Supply.  Next over, the house at 5271 Main Street was built in 1910 by Lomax Parker and the house at 5267 Main Street on the north side of the cemetery was built in 1891. The 1882 church was not immediately demolished after the congregation built the newest brick building at 5291 Main Street in 1915.  According to Mildred Lee Grove, Lomax Parker used the vacant old church as a garage for his car dealership for a number of years (until the 1930s?).  Parker probably had the old church demolished to make room for his new grocery store. The 1882 church cornerstone of that building (the one that is imbedded in the wall of the entryway of our current building) was used as a stepping stone at the rear of Parker’s 1910 house for a long time.  A tenant of that house discovered it and gave it to the church in the 1970s.  The 1915 church replaced the Captain Joseph Long Tavern, a brick Federal-style house built and licensed in 1835 on the corner of Main and Locust Streets.

In 1958, thinking of the future, the trustees bought for $4400.00, the Brison/Dinges house property located between the main church building and the Parker-Doggett House, thus providing the site for the 1966 Educational Building. The old house, built around 1789 was demolished, but the original logs were salvaged and according to Butch Fravel, used elsewhere. The Educational Building was eventually demolished and replaced with a 19,000 square feet office/education/fellowship hall in 2003.

In the yard on the north side of the cemetery, there is a 160-year-old black walnut tree. These trees can live to up to 200 years of age and are one of six walnut species found in the United States.  Black walnut trees have a lovely canopy, stretching up to 100 feet in height.

Just imagine that this walnut tree was planted during the Civil War. The other large trees in the yard are 75-year-old Norwegian maples and silver maples.