As head of missions at our church, I was tasked with organizing a community Easter egg hunt. Our church has been actively trying to reach our Stephens City “neighbors” and what better way than to sponsor this event on the Newtown Commons Park area off Main Street. The committee spent several months in preparation, and the help of many, many volunteers, but the event was well worth the work it took to organize. We are estimating that about 500 to 1,000 adults and children visited on Saturday, April 9th.

The Commons parking lot was filled to capacity with the attendee’s vehicles plus overflowing vehicles spilling onto the adjacent streets to park. I was overjoyed at the positive impact that this event seemed to have on all who volunteered and participated. The egg hunt was more of a carnival atmosphere than the usual Easter event. All participants were requested to stop by the registration table next to the inflatable Easter bunny to sign in to hunt for 4,000 plastic eggs filled with candy and toys.

We invited Mayor Diaz to kick off each of the 4 different age group egg hunts. The children were eagerly searching for the golden eggs to get the Easter basket with additional goodies. To challenge
the older children, the 7 – 9-year-old children participated in a Freeze Egg Hunt. When the music was playing, children could look for the eggs but as soon as the music stopped, they had to freeze
– and they did! Mayor Diaz said that this was his favorite egg hunt. Large numbers of parents surrounded each egg hunt roped off area.

For the oldest group of 10 to 12-year-old children, we devised a 3-Dimensional maze with ropes, hula hoops and pool noodles. Some of the eggs were even hanging from the ropes. The children began to gather around the maze an hour prior to the event. Never seeing one before, they tried to figure out in advance how they could best accumulate the most eggs. Younger children wanted this to be their hunt area.

In addition to the egg hunts, we also featured face painting. Volunteers from Sherando High School (Leo’s, Art Club, and National Honors Society) assisted with this activity as well as other old-fashioned games like the potato sack race and the egg and spoon race. There was a line all day with parents and children patiently waiting for their turn. Mike Bulley, our balloon man made 350 free animals and other things out of balloons. He had a non-stop line from 12 to 4. Mr. Bulley is a member of the Disabled American Veterans Department of Virginia, Chapter 9, Winchester.

The Easter Bunny arrived at 1 pm and was located on the Commons music stage. Many photos were taken by Marty Barley and Mary Beth Powell. The children were so excited to get to see the EB. Stephens City Volunteer Fire and Rescue Department brought their much beloved mascot, Sparky the Fire Dog. Many children wanted their picture taken with him. The fire truck blared its siren to alert children that another egg hunt was about to begin. Stephens City police officers were on hand to manage traffic control around the Commons and provide oversight.

Pastor Bertina Westley attended this event with her son participating in the activities. Pastor Bertina took the opportunity to meet and greet our “neighbors.  Many new relationships were established between pastor and the local community. ”When I asked several people if they would like us to sponsor this event again next year, I was given a unanimous response of  Yes, please!” This was our first time sponsoring a community egg hunt. Like all events, we have had suggestions for things we could add or do differently next year. We will do this again next year. I can’t wait.

Afterward, the Church Facebook page was jumping with activity as photos were posted and many viewers were commenting on what they experienced at our event. In a world that seems at present to be inundated with sadness and pain, what better way to bring our community, our neighbors together for a free, fun filled family day. 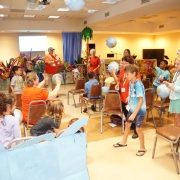 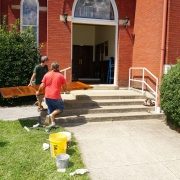 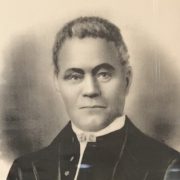 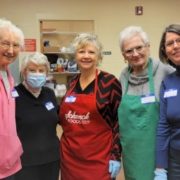 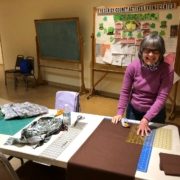 Crazy for quilts: Group makes 15 quilts in two days for good cause

Marty Barley VBS, then and now…

Marty BarleyVBS, then and now…
Scroll to top